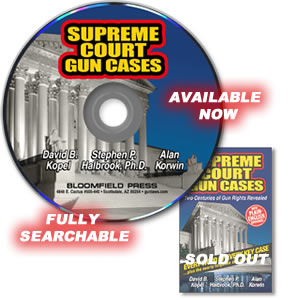 Six years after I started working on Supreme Court Gun Cases it finally went on press in July 2003, with a release date of September 2003. Here is what I found and what I did:

The Court has NOT been quiet --
there are 92 gun cases!

The Court repeatedly recognizes
an individual right to arms.

The Court repeatedly recognizes
the right to armed self defense.

To stop the spin doctors,
I’ve reproduced all the actual cases.

My trademark "plain-English summaries"
are included with each case.

I've highlighted more than
1,000 amazing quotes from the cases.

It's the most stunning support for personal gun rights in years.

I didn't just do this by myself -- my two co-authors are Attorney Stephen Halbrook, who has argued and won three Supreme Court gun cases, including the Waco/Branch Davidian case; and Attorney David Kopel, one of the top Second Amendment attorneys in the nation.

Key gun-rights leaders have seen early drafts
and we've been honored with testimonials from
the top organizations in the field, including:

This book changes the political landscape on the gun debate.
See the color cover here:
https://www.gunlaws.com/supreme.htm

A summary of the main points is included below.

Highlights
Released in September 2003, Supreme Court Gun Cases dispels the myth that the High Court has been quiet on the subject of guns. The book runs 672 pages, covers 92 gun-related cases, and this is the bottom line: the Supreme Court has upheld the legal tradition and historical record of private gun ownership, self defense, and armed self defense, since the country began. The days of saying Americans have no individual gun rights are now over.

Time and time again, the Court recognizes the individual right to keep and bear arms that we observe in every facet of American life, in this scrupulously researched text. The anti-rights argument collapses under the weight of the evidence, and will force gun banners to find something new to say. Americans have a constitutionally protected right to keep arms and to bear arms.Here's the tip of the iceberg:

(WARNING: The following is not legal advice. Local jurisdictions may not adhere to these Supreme Court results, may have introduced conflicting precedents, and may have enacted laws in direct conflict with these decisions or provisions in the Constitution.)

- A dozen nearly forgotten self-defense cases expressly recognized people's right to use personally owned firearms in defense of self, family and property.

- Going home to get your handgun for protection after being threatened was a reasonable act under the given circumstances.

- Borrowing a rifle for protection after you were threatened was a reasonable act under the given circumstances.

- Using a shotgun you normally carry for protection was a reasonable act under the given circumstances.

- Defending yourself against a criminal attack, in a place where you had a right to be, matching force with force, was perfectly legal under the given circumstances.

- Standing your ground against a criminal attack is justifiable, and although you can run if you are able or prefer to, there is normally no duty to retreat under American law. (Note that some states may have abandoned this fundamental principle.)

- The rights of the people to keep arms and to bear arms predates the Constitution and is protected by the Bill of Rights.

- The false notion that the Second Amendment protects only some sort of collectivist states' right to a militia, instead of individual rights, springs from a single appellate court case (Tot v. U.S., 1943), which did not support its thesis, but was subsequently adopted by numerous other federal courts without critical review of the faulty premise.

- The phrase "the people" used in the 2nd Amendment refers to the same class of people referred to in the 1st, 4th, 9th and 10th Amendments of the Bill of Rights, as well as Article 1, §2, cl. 1 of the Constitution, which specifies that Representatives are to be chosen by "the people."

- The Supreme Court cannot decide that gun ownership is an individual right because they've already done that, repeatedly. The only thing the Court could do now is change its mind and adopt some other position, by going against a record built up for over two centuries.

- The Supreme Court has not been quiet about guns -- a word that appears in some form 2,910 times in the decisions, carefully reprinted in Supreme Court Gun Cases (gun, shotgun, rifle, pistol, etc.). The Court has been essentially consistent for two hundred years. Individual Americans have the right to keep and bear arms, and the right to use arms in self defense. Saying the Court has not recognized your rights is baloney. This was a well-understood, settled matter of law by the early 1900s. Disputes about this are new inventions. Enlisting in the National Guard has nothing to do with it. Free able-bodied people are the militia by virtue of simply being here. The reason you can go out and buy a gun is because you have a right to have a gun, and have always had this right. Gun haters are going to hate this book.

- Many minor (and some not-so-minor) infringements on the right to keep and bear arms exist nationwide, have been frequently upheld by lower courts, and have not been recently addressed by the High Court. Never forget that no matter what any court says, the law means what the officer with the gun in your ear says it means.Supreme Court Gun Cases is a good read thanks to the plain-English gists with each case -- you've got mutinies, lovers climbing in bedroom windows, Wild West shootouts, corrupt judges, conspiracies, mob ambushes, drunken brawls, drug busts, family feuds, international criminals -- if you threw this much into a novel your agent would say you were nuts. But this is all real!

"Right in the face of unrelenting media distortion and anti-gun propaganda, Supreme Court Gun Cases proves beyond any doubt that the Court has explicitly upheld the legal and historical record of private firearms ownership and armed self-defense. This book proves what NRA has been saying all along -- the Second Amendment protects an individual's right to keep and bear arms -- a freedom existing before America’s founding and enshrined in our Bill of Rights."
Wayne R. LaPierre, Executive Vice President, National Rifle Association

"...a political earthquake... an exceptional piece of research... the anti-freedom crowd is not going to like Supreme Court Gun Cases."
Larry Pratt, Executive Director, Gun Owners of America

"...dynamite... Sometimes people need to defend themselves while we're responding to a 911 call. Law enforcement officers know that firearms in the hands of decent people are a deterrent to crime... It's good to know the Supreme Court has been this positive about gun rights and self defense... pulls the rug out from under politicians who want you to believe you have no right to defend yourself or own a gun."
Joe Arpaio, "America's Toughest Sheriff"

"Academics and judges will be surprised (no actually shocked) by how many times the Supreme Court has issued decisions bearing on private gun ownership. The extremely careful attention to documenting all the decisions will make it very difficult for future court decisions not to be affected by this work. The number of precedents is truly overwhelming."
John R. Lott, Jr., Ph.D., Resident Scholar, American Enterprise Institute

"...a stunning accomplishment... will change the political landscape on the gun-rights debate."
Evan Nappen, Attorney and Author

"The dream team of American gun-law experts has driven a stake through the heart of the anti-rights gun-ban lobby... gun haters will need to manufacture new lies... The individual right to keep and bear arms is an American tradition with roots as deep as the nation itself."
Alan Gottlieb, Chairman, Second Amendment Foundation

"...the rights of man are endowed by their Creator, but ensured by the state... Each responsible citizen must consider himself to be the custodian of his own liberty, and thus it is incumbent upon him to understand the processes by which such liberty is ensured. This text covers that subject at appropriate length."
Lt. Col. Jeff Cooper, USMC (Ret.), "The Father of the Modern Techniques of Shooting"

"While the Supremes have directly acknowledged the Second Amendment as an individual right, this new book unearths 92 gun-related cases where the High Court upheld, among other things, armed self-defense of person, family and community -- the heart of the Second Amendment. The synopsis of the Miller case is the best I have ever read."
Neal Knox, Gun-Rights Activist and Writer, The Firearms Coalition

"...strikes a powerful blow for freedom... I'm particularly gratified to learn how vigorous the Court has been in supporting the right to self defense. If more states accepted this, countless innocent lives would be saved. My hope and prayer is that your book will supply the brain-cell ammunition necessary to continue our battle against those who would deny Americans such a basic human right."
Suzanna Gratia Hupp, Texas State Representative, Survivor of Luby's Massacre and Mother

"My interviews of gun-control spokespeople show they either don't know or won't tell the truth about how the Supreme Court has consistently ruled in favor of a strong Second Amendment. This book, in the Court's own words, should convince anyone that the right to own firearms is at least as strong as the right to free speech. Bravo on an important scholastic work that is easy to read and understand."
Tom Gresham, Nationally Syndicated Radio Talk Show Host